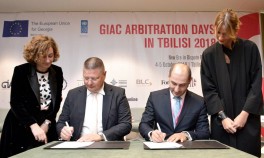 Georgian International Arbitration Centre, with financial support of EU and UNDP, hosted the fifth annual GIAC Arbitration Days in Tbilisi. The topic of the conference was New Era in Dispute Resolution.

The two-day event was opened by the President of the Georgian Chamber of Commerce and Industry Ms. Nino Chikovani. Ms. Chikovani has emphasized in her speech that it is crucial for the business sector to have independent and efficient alternative dispute resolution mechanisms.

Ms. Thea Tsulukiani, Minister of Justice of Georgia, H.E. Carl Hartzell, EU Ambassador to Georgia, Nino Bakakuri, Georgia Supreme Court judge, Mr. Irakli Lekvianidze – Business Ombudsman of Georgia and Ms. Sophie Tkemaladze, Chair of Georgian Association of Arbitrators addressed participants at the opening session. Minister Tsulukiani had expressly conveyed the message that Georgia has all what is needed in order to develop arbitration services and to become regional hub. Herewith, the Minister explicitly encouraged business sector to use arbitration as the main mean for resolution of the disputes, stating that “courts should be alternative to arbitration for dispute resolution”. Furthermore, the Supreme Court Judge, Ms. Bakakuri expressed the position of the court and stated that Georgian courts are arbitration friendly. Finally, the Business Ombudsman of Georgia Mr. Lekvianidze spoke about the benefits of the alternative dispute resolution mechanisms for business sector.

Afterwards, Mr. David Saganelidze, the Chief Executive Officer of JSC “Partnership fund” and the Board Member of the GIAC addressed the practitioners with the special speech – why businesses choose arbitration. He underlined the benefits of arbitration in business disputes and encouraged business sector to use arbitration as a dispute settlement mechanism more often.

It should be mentioned that this year’s conference boasted record number of participants from all around the globe. Some of the leading experts invited to the conference were: Mr. James Bridgeman (President of the Chartered Institute of Arbitrators), Dr. Alexander Petsche (VIAC Board Member, Partner at Baker Mckenzie, Vienna), Thomas Snider (Partner, Head of Arbitration at Al Tamimi & Company, DIFC), Catherine A. Rogers (Professor of Law at Penn State Law and the Queen Mary, University of London) and etc.

The first panel of the conference was dedicated to the technical innovations in the arbitration. The panel members discussed the interested topics, such as electronic document production, online dispute resolution and blockchain technology in arbitration.

The second panel was devoted to the possibly the hottest topic in arbitration, which is diversity. The speakers discussed the current situation in international arbitration and deliberated about the possible options to make arbitration more diverse.

The last panel of the first day was an Evidence Taking Battle, where the panel members debated about the differences in IBA Rules on the taking of evidence and the recently developed Prague Rules on taking evidence.

The second day of the GIAC Arbitration Days was opened by the panel on Third-Party Funding. The members of the panel talked over the practical aspects, such as due diligence stage before the funding and considered the future of the industry.

After the fifth panel, the main conference was finished and the Secretary General of the GIAC, Mr. Beka Injia thanked all the participants of the conference, sponsors and supporters and invited them on the next GIAC Arbitration Days.

The main part of the conference was followed by two parallel side-events, the ICDR Y&I Workshop on Drafting Effective Arbitration Clauses for Businesses and CIArb Practitioners’ Workshop on Dealing with Ethical Dilemmas in Arbitration.

The ICDR Y&I Workshop was specially shaped for the business industry and members of the various business sectors attended the event. During the Workshop, the speakers spoke about the importance of drafting the valid arbitration agreement and highlighted all those necessary points which the parties should include in their agreement.

With regard to the CIArb workshop, it addressed the ethical duties and professional conduct of arbitrators at different stages of arbitration, starting from pre-appointment and ending with post-award stage.