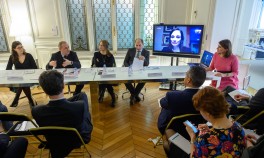 In the framework of Paris Arbitration Week, on 4th of April 2019, a Round-table discussion was held at Jeantet – avocats office. The topic of the discussion was: Arbitrating in CEE & CIS: Transparency, Accountability and Choice of Arbitrators.

In the first part, the speakers shared their practices in appointment of arbitrators and highlighting the principles they are guided by during the appointment. Additionally, the panel members spoke about the balance between transparency and confidentiality, as well as about the main challenges and solutions to them.

In the second part, Catherine Rogers presented Arbitrator Intelligence tool, which is designed to assist the parties and the arbitration institutions in choosing the suitable arbitrator for the case.

During the third part, a deputy counsel at the ICC Arbitration Ivana Blagojević presented a project of the ICC on the publication of the arbitral awards.