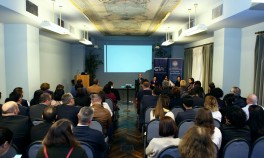 The goal of the meeting was to provide information to the business sector regarding Mediation, which is one of the alternative dispute resolution methods and to highlight its benefits. Furthermore, in the framework of the meeting, the novelties were discussed under the new Draft Law on Mediation which is currently initiated in Georgian Parliament.

In her opening remarks, Ms. Nino Chikovani spoke about the important role of the Georgian Chamber of Commerce and Industry to support and constantly update the business sector on the recent developments, which was the reason for holding the meeting. Ms. Nino Chikovani also spoke about importance of establishing and developing the effective dispute resolution methods for the business disputes.

Ms. Thea Tsulukiani spoke about the reform initiated by the Ministry of Justice in order to develop and promote Mediation and outlined the significance of having the efficient dispute resolution mechanisms in the country, which will provide new opportunities to the business sector. As the Minister noted, the business will be able to resolve their dispute faster, and more efficiently with the less costs by court or commercial meditation.

The last opening remark was made by the Secretary General of Georgian International Arbitration Centre, Mr. Beka Injia, who spoke about the activities of the Centre and about the upcoming plans. Additionally he announced the new project of the Centre to establish the commercial mediation service within the institution. The launch of the commercial mediation service will facilitate the use of mediation within the business entities and thus, promote ADR in the country.

The meeting continued with the presentation by Ms. Sophio Chachava about the main aspects and procedures of Mediation, followed by the presentation of Ms. Irine Tsakadze, Head of Legal Drafting Department of Ministry of Justice on the new Draft Law on Mediation.

The meeting finished with the Q&A session, where the attendants had the opportunity to ask specific questions regarding the topic.