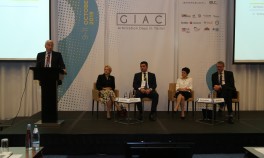 The fifth GIAC Arbitration Days was held on 9-11 October 2019. The topic of this year’s conference was Role of Dispute Resolution in State Economy.

GIAC Arbitration Days started with the side event at the Supreme Court of Georgia. The seminar was devoted to Convention on the Recognition and Enforcement of Foreign Arbitral Awards: “1958 New York Convention: 60 and still Modern”.

The panel composed of Prof. Emanuel Gaillard, Dr. Yas Banifatemi and Judges of the Supreme Court of Georgia – Mr. Besarion Alavidze and Appeal Court of Tbilisi Ms. Ketevan Meskhishvili discussed the topics related to the Convention.

The official opening of the GIAC Arbitration Days 2019 was on 10th of October. President of the Georgian Chamber of Commerce and Industry Giorgia Pertaia welcomed the guest of the conference and spoke about the importance of having an independent, impartial and reputable arbitration institution in the country as it is a key feature for improving the investment and business environment.

After the welcome addressed, Prof. Emanuel Gaillard gave the key note speech on New Insight into the Sociology of Arbitration. He spoke about the new players in international arbitration, such as artificial intelligence and secretaries. At last but not least, he spoke about the current changes and challenges with respect to investment arbitration.

After the key note speech form Professor, the ICC-GIAC panel on Regional Development of Arbitration took place, which was composed of Mariam Gotsiridze (Ministry of Justice of Georgia), Živa Filipič (ICC Court of Arbitration) and Beka Injia (GIAC). Ms. Gotsiridze addressed the audience with the presentation on Georgia and overview the benefits and advantages of the country as a seat of arbitration. Ms. Filipic spoke about the regional experience of ICC, while Mr. Injia presented the insights of GIAC. The panel was moderated by Ketevan Betaneli (Freshfields Bruckhaus Deringer LLP). The panelists also spoke about the recent MoU between ICC Court of Arbitration and Government of Georgia which intends to develop arbitration in the country.

The second panel was devoted to business and it choices with respect to dispute resolution tools. Karl Hennessee (Airbus), James Bridgeman (Chartered Arbitrator, Accredited Mediator, London), Marina Matousekova (CastaldiPartners), Giorgi Batlidze (BLC Law office) and Nick Gvinadze (Gvinadze & Partners) discussed the main benefits of arbitration for business and overviewed various reviewed various tools in conjunction with arbitration, such as mediation and court. Additionally, the practice of IFIs was discusses with respect to the dispute resolution clauses.

The first day of the conference was closed with the panel on mediation with the provocative name: Mediation: Worth to Try?

Sophie Chachava (Independent Mediator), Diana Paraguacuto-Maheo (Foley Hoag LLP), Sophie Tkemaladze (Independent Mediator, Chair of the Georgian Association of Arbitrators) and Irakli Kordzakhia (Kordzakhia, Jgenti Law Firm) deliberated on mediation, its main features and also spoke about the recent Singapore Convention on Mediation, which will boost the use of this tool worldwide.

The second day of the GIAC Arbitration Days was opened by the panel on investment arbitration. Patrick W. Pearsall discussed investment arbitration from more of states perspective, focusing on different aspects such as treaty drafting, interpretations, etc., while John Willems (White&Case) overviewed the current trends in BIT drafting. Markiyan Kliuchkovskyi’s (Asters) presentation was dedicated to protection in conflict zones and was also focused on the processes which are currently going in Crimea and Dombas. After the presentations, Dr. Yas Banifatemi, who was the moderator of the panel initiated a fruitful discussion on the current trends and challenges in ISDS.

The following panel with Sebastian Seelmann-Eggebert (Latham & Watkins LLP), Helene Gogadze (Sheppard, Mullin, Richter and Hampton LLP, Washington D.C.), Alice Fremuth-Wolf (Vienna International Arbitral Centre) and Fadri Lenggenhager (Lenz & Staehelin) was devoted to interim measures available in international arbitration. Helene Gogadze discussed the general practice and standards for rendering the interim and preliminary measures, while Sebastian Seelmann-Eggebert was focused on the interim measures with respect to the investor-state arbitration. At last but not least, Alice Fremuth-Wolf spoke about security for costs and the manner of its application.

With that panel the official part of conference was closed, however, the participants were able to attend the side event held by ICC YAF and ICDR Y&I on tempering evidence in the era of technology.
The panel was composed of Sandro Bibilashvili (BGI Legal), Michael Davar (Squire Patton Boggs), Tamta Ivanishvili (BLC Law Office), Natalia Jodłowska (GESSEL) and Tomas Vail (International Arbitration Counsel). The first part of the seminar was dedicated to witness statements in international commercial arbitration. Tamta Ivanishvili deliberated on the advantages and disadvantages the written witness statements and preparation phrase, while and Michael Davar was more focused on physiological aspects with respect the examination of the witnesses. During the second part of the seminar, Sandro Bibilashvili and Tomas Vail considered the new technologies and their influence on arbitration.